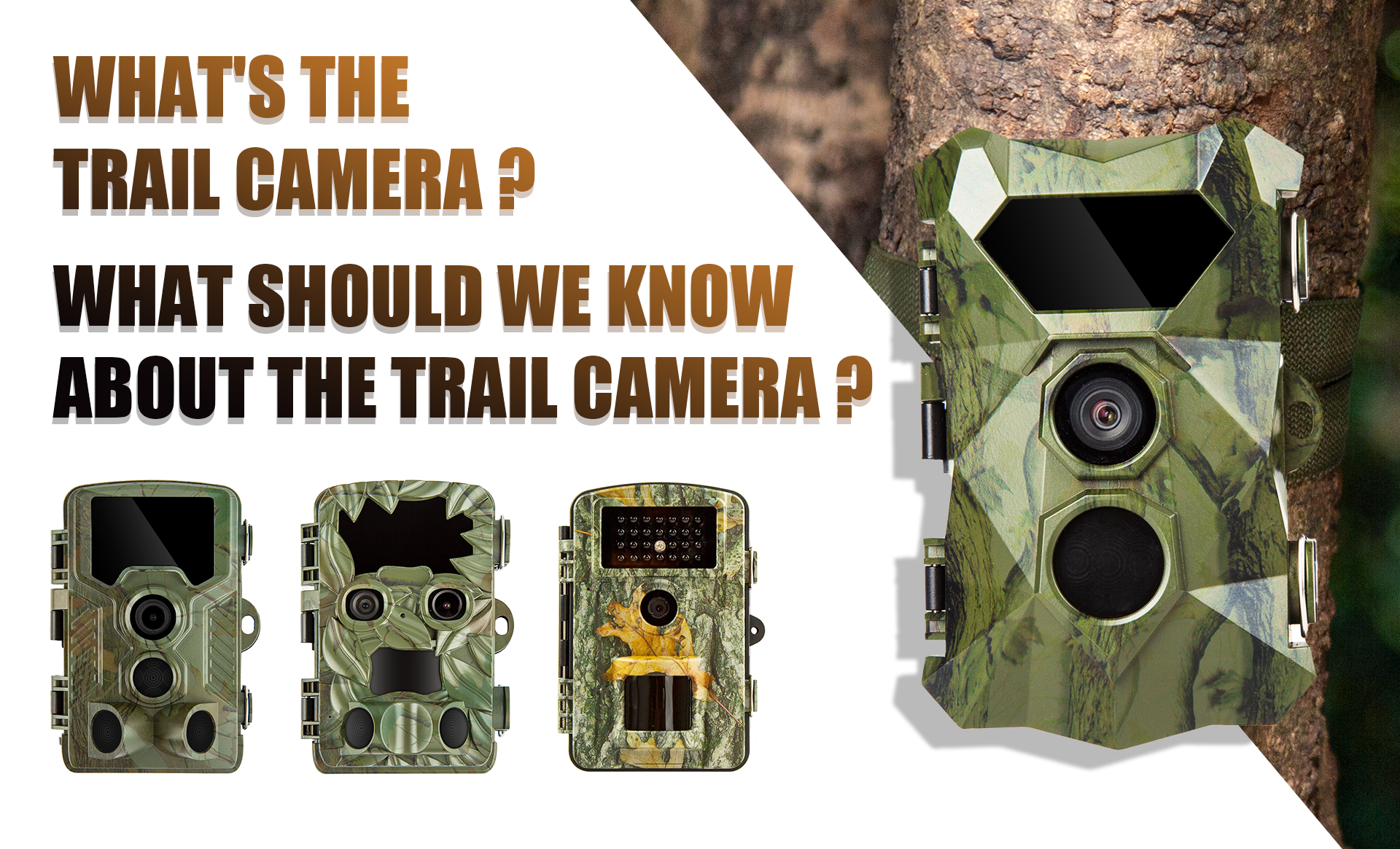 With the advancement of technology, trail cameras have become an essential tool. In addition to biologists, curious wildlife enthusiasts, and hunters all use trail cameras to capture images of animals. Trail cameras also are used by private landowners or farmers as surveillance or as security camera. Trail cameras, also known as trap, game, or wildlife cameras, are equipped with passive infrared motion detectors that trigger a shutter when an animal (or intruder) enters its field of view.No matter how you intend to use a trail camera, you must consider the following aspects. Our guide to trail cameras will help you understand which camera is right for you and the features you need.

How Do Trail Cameras Work?

Trail cameras are motion-sensitive. When an animal or human moves in front of cameras, a motion sensor is first triggered to detect movement and heat. The sensor then triggers a small camera lens to take a picture, which is then digitally recorded onto a secure digital card (SD card). At night, trail camera uses infrared LEDs to illuminate surroundings in low light, so there is no visible flash that can frighten animals. This results in black-and-white images.

With a basic understanding of trail cameras, You also need to know that not all trail cameras are created equal. As technology advances, so do camera features.

The trail camera has a passive PIR sensor that detects heat and motion. When an animal walks in front of the PIR sensor, the heat triggers the camera to snap a photo.The faster the movement, and therefore the greater the rate of change in temperature, the more likely the PIR is to trigger the camera. The sensitivity of a PIR to detect these subtle temperature changes will depend on the make and model of trail camera used.

Trigger speed is the time it takes for the camera to take a photo once the animal enters the frame. This is entirely a feature of the make and model of the camera and can be as fast as 0.1 seconds or as slow as 1+ seconds. This means the difference between a fast-moving animal being photographed or being missed altogether.

3. Recovery time (time between a picture/video being taken and the camera being ready to be triggered for the next)

Good trail cameras have a very short recovery time and keep on taking multiple pictures in a row.
While a low-cost trail camera might be tempting, we recommend ensuring the trigger speed and recovery time are adequate, especially if placing the camera on a path or trail. It would be a pity to miss a beautiful moment due to the slow recovery time.

Most trail cameras have fixed lenses so the angle of view can not be altered. Choosing a wide-angle lens is great for getting a lot in the picture, but individual subjects risk appearing small on the image. Whereas a narrow field of view, zoom lens, can miss a lot of detail.

At night, light is required to photograph objects, hence the trail camera's need for artificial light.
Cameras typically have three types of flash:
White flash- increasingly rare, allows the camera to take full-color photos at night, but it can scare the animals you're photographing
Low Glow Flash - Also referred to as Red Glow or Infrared. Standard low-glow flashes use LED arrays emitting infrared at a wavelength of around 850 nm. This type of flash produces a dim but still visible red light when taking night photos, that there is still a faint red glow visible to the human eye, and also visible to animals. But most animals don't care about this light very much. This will only produce black and white night photos.
No Glow Flash - Also referred as black infrared or black flashes, no-glow flashes use LED arrays emitting infrared at a wavelength of around 940 nm. Completely invisible to humans and largely invisible to animals. May not have the same flash range as other camera flashes That long, the photo is usually darker. 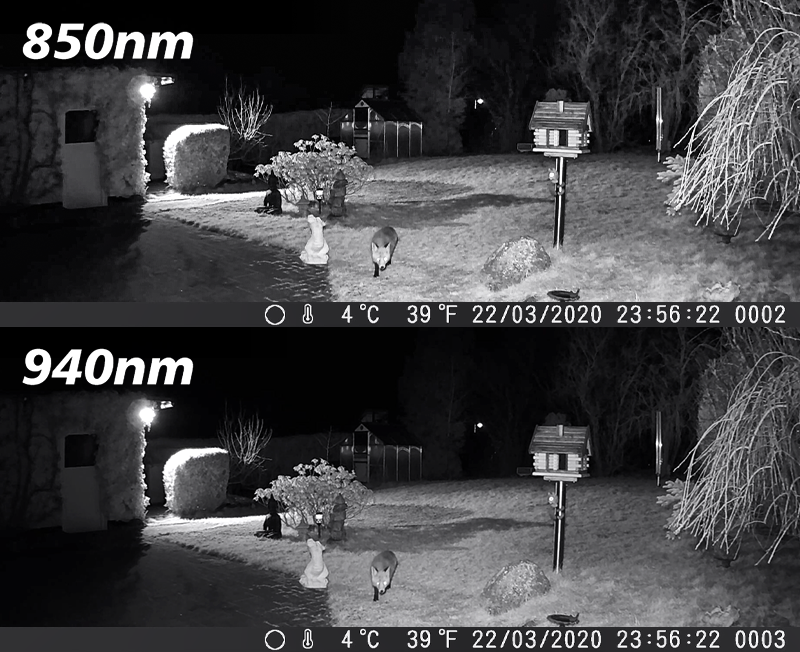 Flash type affects image quality, but the feature having the greatest effect on this is the resolution of image-sensor used. Resolution is stated in Megapixels (MP), and is simply the number of pixels recorded in a digital image. One Megapixel is one million pixels. The more Megapixels, the better quality the image is likely to be, but with the downside that a high Megapixel count will result in you using up your camera's memory storage (its SD card) more rapidly.Most people believe that a camera with higher MPs will take a better photo than a camera with fewer. However, the quality of a camera’s lens, sensor and image processor do far more to create a better photo than MPs. Trail cameras allow you to select various sized digital photos to be captured — from high resolution images that use the maximum MPs, to low-resolution images that use fewer MPs.

7. Picture/Video settings and their effects

Hybrid Mode – The trail camera will take both a photo and a short video. You get the best of both worlds with just one trigger, but it’s usually found only on higher-end models.
Time-Lapse Video Mode –The camera records a short video at certain time intervals, such as every hour. You can choose the time between video recordings and the length of the video that will be recorded.
Picture Burst Mode - The  trail camera takes multiple pictures in quick succession. This ensures that you can clearly see the fastest animals after triggering the camera (day or night). Typically you can take 3 shots at a time, a good camera can take up to 10 at a time
Video Duration - Most video recording trail cameras will allow you to choose the length of video it will record. Videos range from 3sec-10Minutes, depending on the model.（Be aware that videos take up a lot of space on the SD card）

Trail cameras use an SD card to store all the pictures or videos.
If your memory card is not big enough, your small card will fill up quickly, which will force you to access your camera more frequently. As a result, the animal becomes aware of your presence more quickly.
Be sure to check what storage capacities a trail camera is compatible with.The capacity of an SD card ranges from 16 GB, 32 GB to even 512GB. A camera that’s compatible with SD cards up to 32GB will not recognize one with a larger capacity like 64GB.

The battery is necessary to keep the camera running, Each camera has a battery level indicator. Modern trail cameras run on AA alkaline or lithium batteries. Lithium batteries will typically last longer and work better in cold weather than alkaline batteries.

Power Accessories -a great tool to increasing camera longevity in the field. Coolife cameras have an external power jack to accept power accessories.

Solar Panel – Solar panels can power your trail camera indefinitely (so long as the sun is shining). We usually recommend that the solar panel and battery are used together, when it becomes cloudy the solar panel will not work, and the battery can provide power for your camera.

Remote access to pictures/video
More and more cameras are now cellular or WiFi capable, which facilitates remote access to cameras. This is useful if the camera is located in a particularly inaccessible or dangerous location, or if the ecosystem is disrupted by humans accessing the camera multiple times Function. But remote access will boost your purchase budget, while also draining battery power quickly because of image transfers.

Security
1. The appearance of many cameras will be integrated into the surrounding environment as much as possible,
2. Many trail cameras are equipped with a hole through which a Python cable lock can be passed (for attaching to the tree)
3. Then there are 'cages' sometimes referred to as 'bear-cages' into which the entire camera can be fitted, but with a pre-cut hole for the lens, PIR, and flash. These help prevent damage by wildlife as well as theft.

The camera provides the user with information such as date, time, moon phase, and temperature when capturing an image. This will be beneficial for observers who want to know everything about animals, and of course, this feature can also be turned off.

Factors to Consider When You're Buying a Trail  Camera

1. What is the main use? Hunting, animal research observation, safety, backyard animal viewing?
2. what is your budget？
3. What kind of environment are you going to use the camera in, Where will you put cams (field edge, trails, scrape/rub lines, feeder locations)? 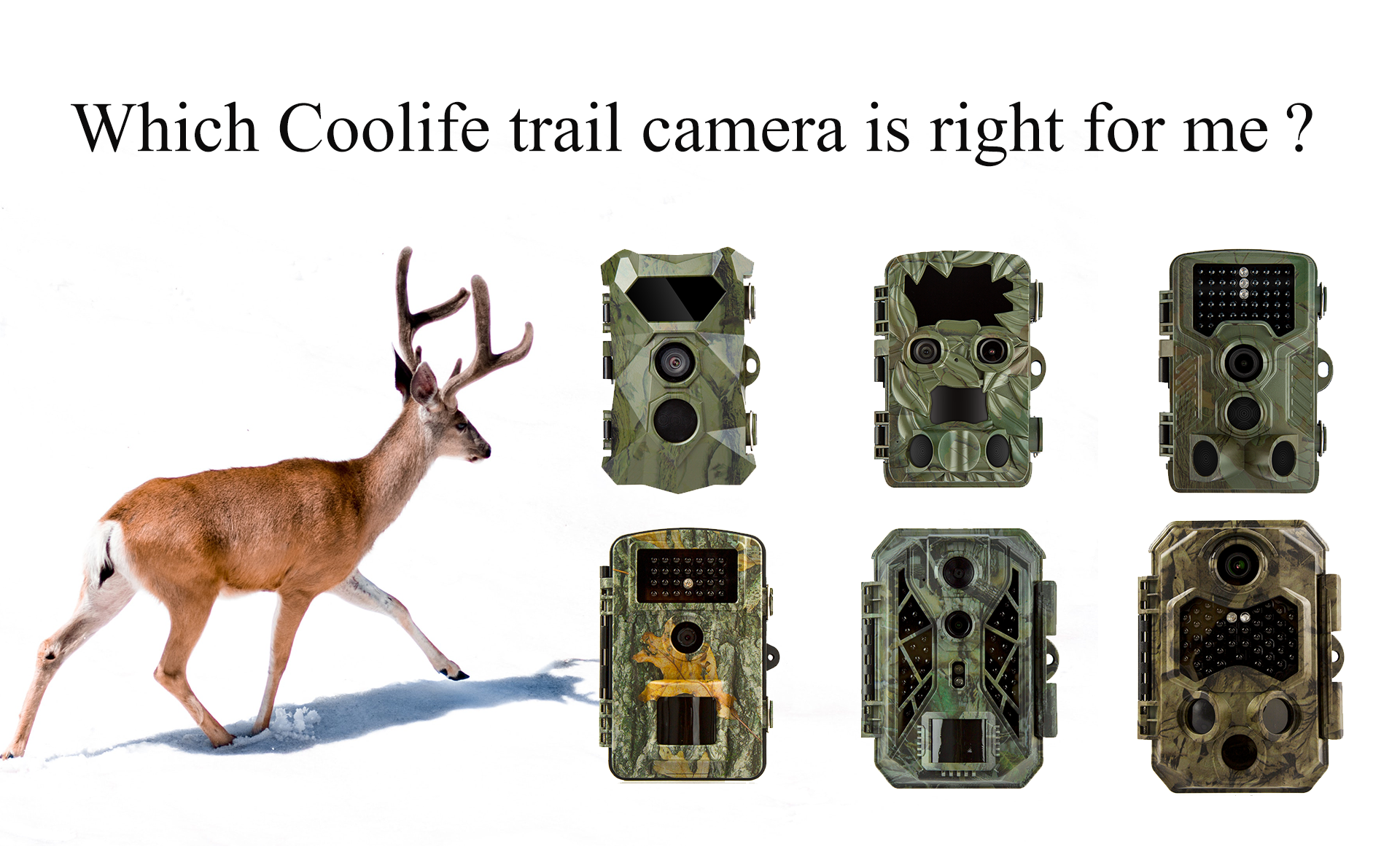 Which Coolife trail camera is right for me？

How to choose a Coolife trail camera according to our needs? 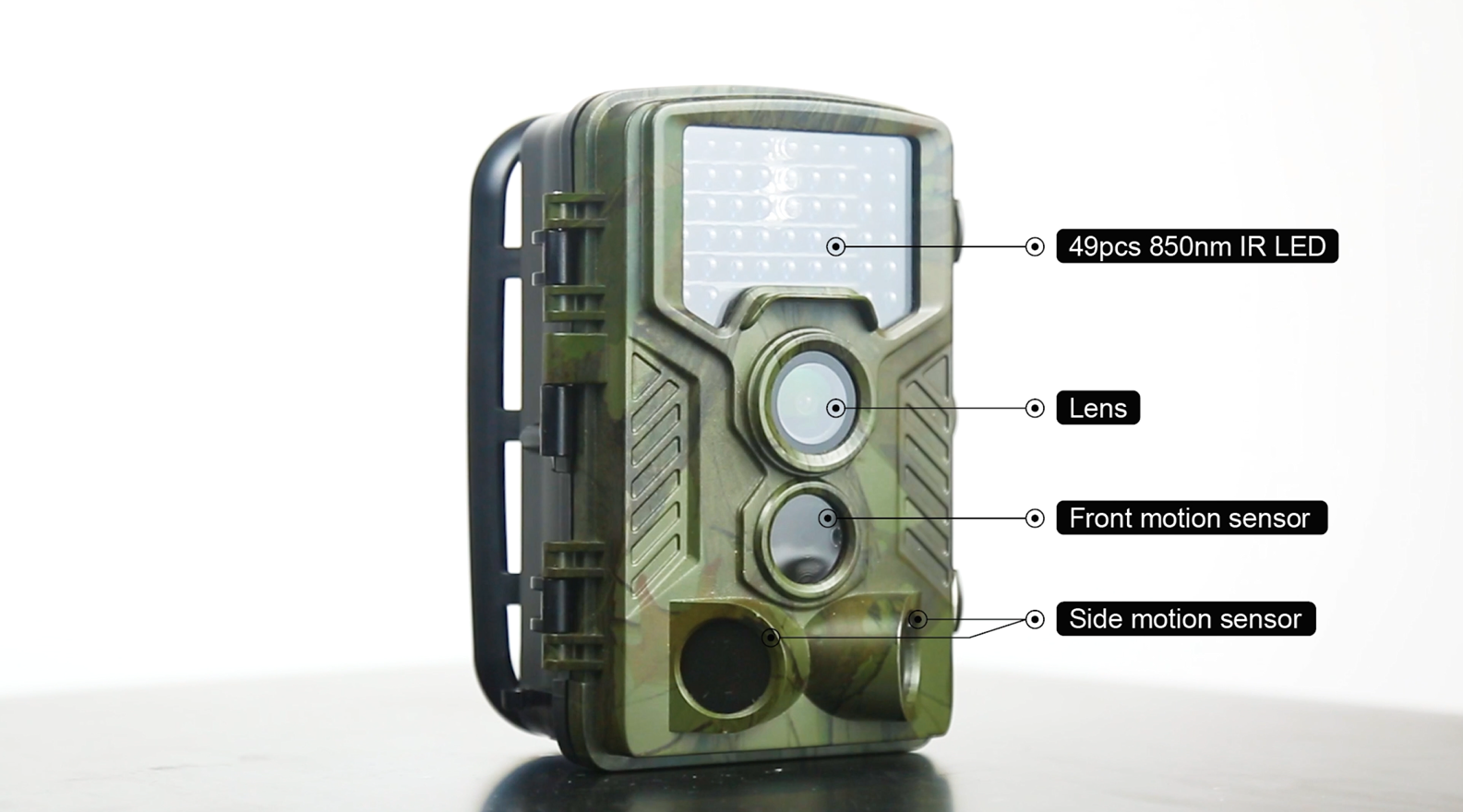 If you are buying a trail camera for the first time and don't know how to set it up, then watch this video